Photo courtesy of Wonders of Wildlife
2 of 10

The 1926 Gillioz Theater, one of the top downtown entertainment venues in Missouri

Meeting the Springfield Cardinals’ mascot before a game at Hammons Field

Discover the beauty of the Ozarks waterways while kayaking

Cannon firing during a reenactment at Wilson’s Creek National Battlefield

A classic Corvette outside the Route 66 Springfield Visitor Center

Sharing in the wonder of this vibrant, friendly city

Known as the pulse of the Ozarks, Springfield, Missouri, is rooted in the celebration of family, friends and life’s genuine moments. A regional hub with big-city amenities and small-town hospitality, the city is filled with opportunities to create big moments and lasting memories. Find intriguing attractions, a diverse culinary scene and unique shopping, all in an atmosphere that radiates classic Americana heritage. In Springfield, you can enjoy out-of-the-ordinary experiences while still feeling right at home.


Shop, Stroll, Eat and Be Amazed

Visitors to Springfield can expect to spend hours at Bass Pro Shops Outdoor World, the No. 1 tourist attraction in Missouri. The company’s first and largest store is filled with aquariums stocked with native fish, waterfalls, taxidermy displays and one of the largest selections of hunting, fishing and outdoor gear. Johnny Morris’ Wonders of Wildlife National Museum & Aquarium opened to accolades in 2017 and was voted the No. 1 Best New Attraction in America by USA Today readers. Adjacent to Bass Pro Shops, the nearly 33,000-square-meter aquarium and wildlife galleries showcase more than 35,000 live fish, mammals, reptiles and birds along with a spectacular collection of record-setting game animals. Visitors will find themselves immersed in an exotic experience that takes them around world, from the hot African savanna to the Arctic tundra complete with the Northern Lights dancing overhead.

Springfield is recognized as the official Birthplace of Route 66. The historic “Mother Road” linking Chicago, Illinois, and Los Angeles, California, got its name during a meeting of highway officials there in 1926. History buffs will want to cruise along local portions of the famous highway, making stops at the History Museum on the Square, Route 66 Car Museum, and the Park Central Square site of the quick-draw shootout between Wild Bill Hickok and Davis Tutt. At Wilson’s Creek National Battlefield, where the second major battle of the American Civil War took place in 1861, see war exhibits and go on a self-guided trail tour.

There are many reasons to extend a stay in Springfield. Among them is Fantastic Caverns, the only cave in North America large enough to ride through on a 50-minute tour of an underground riverbed on Jeep-drawn trams. Smallin Civil War Cave also has the largest cave opening in Missouri. Stroll through 32 hectares of native forests and fields at the Springfield Conservation Nature Center, then go to Dickerson Park Zoo to see more than 340 animals representing 120 species. Children will adore the Discovery Center, an interactive, hands-on educational experience where they learn while they play with everything from a giant eyeball to building blocks.

For sports fans, the Missouri Sports Hall of Fame has 2,000 square meters of sports memorabilia and displays. Take in a game at Hammons Field, home to the Springfield Cardinals, a Double-A franchise of the St. Louis Cardinals. A trip to Springfield is not complete without an excursion to downtown Springfield or Historic C-Street, two unique areas of the city filled with one-of-a-kind boutiques, award-winning restaurants and vibrant entertainment options.

American folk hero "Wild" Bill Hickok was involved in the first recorded quick-draw shootout of the Wild West era, which occurred on Park Central Square in 1865.

In 1953, about 10 hooded cobras escaped from a local pet shop. While the cobras caused fear throughout the city, some businesses offered cobra haircuts, cocktails and other cobra-themed items. The incident was covered by national media.

Route 66 Through Missouri: Get Your Kicks in 3 Charming Areas

Branson, Missouri: Entertainment and Inspiration in the Ozarks

Dining Along Route 66: A Missouri Road Trip for Foodies

A Taste of Missouri Barbecue

10 Desserts to Satisfy Your Sweet Tooth in Missouri

Ask a Local About Columbia, Missouri

7 Spots for Family Fun Around the USA

Rock Out and Fill Up: Restaurants with a Rock ‘n’ Roll Soul

Dig for Buried Treasure in the USA

Hip Hop in the USA: Exploring the Cities Behind the Music

See Iconic Attractions across the USA with Go City 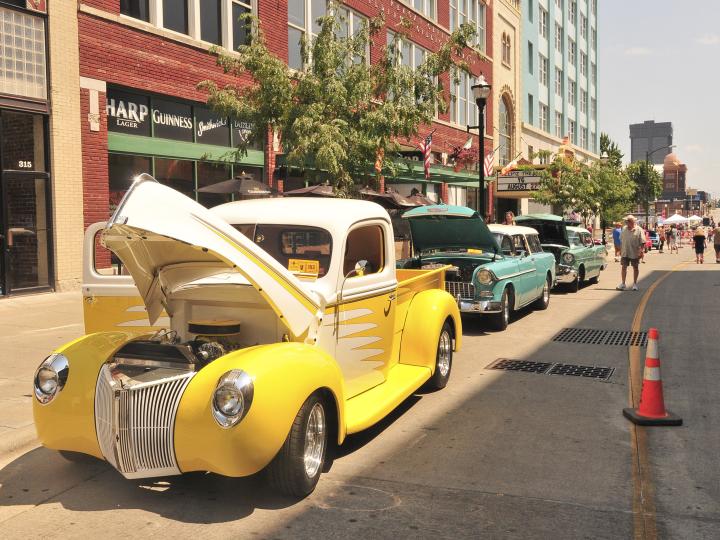 Fountains of Fun in Kansas City