A perfect Pacific Ocean sunset over the Santa Monica Pier

An ideal spot for meditation on Santa Monica Beach

A classic neon sign on the Santa Monica Pier

Acrobats and athletes training at the Original Muscle Beach

Picking up fresh produce at one of Santa Monica's farmers markets

Boutique shopping at Goods in the Ocean Park neighborhood

A relaxing, coastal getaway just west of the city grind

Basking in sunshine 280 days of the year and located just 20 minutes west of downtown Los Angeles, Santa Monica is a walkable oasis teeming with outdoor adventures, luxury wellness spas and opportunities to kick back under blue skies and awe-inspiring sunsets. Catch some waves, chill out on pristine beaches, and cruise bike trails with dazzling views. Jump on a roller coaster, bumper cars and other surfside rides on the historic pier. Roam eight distinct neighborhoods featuring shopping, art and entertainment; browse the weekly farmers markets; and dine al fresco at a never-ending variety of excellent eateries. In any season, escape awaits in this magical city by the sea.

In a state known for icons, Santa Monica’s landmarks are impressive. Several can be found on its 5.6-kilometer Pacific Ocean beachfront, celebrated for its surfable waves and waterside recreation. Its centerpiece is the famed Santa Monica Pier, which stretches out over the waves and lights up the sky with its solar-powered Ferris wheel, the flagship ride at Pacific Park. There are also restaurants, an aquarium, games, street performers, sweet treats and nightly sunsets over the ocean. For a classic beach day, head north to the North Beach Playground and Annenberg Community Beach House, which features a pool, playground, splash pad and beach sports. It’s also free and open to the public, but has exclusive roots: It was built for actress Marion Davies by William Randolph Hearst and was visited by Hollywood icons such as Charlie Chaplin and Greta Garbo.

Activities Along the Shoreline

Your Santa Monica vacation shouldn’t stop at only seeing the breathtaking scenes and sights. To truly enjoy them, get out and experience them. On the south side of the pier, you’ll find the Original Muscle Beach, an outdoor gym area featuring ropes, parallel bars and other equipment, where fitness buffs and families alike can show off for anyone who wants to watch. The 35-kilometer Marvin Braude Bike Trail, known locally as The Strand, runs along the coast and has been featured in countless films and TV shows. The cliffside houses in the Pacific Palisades will be instantly recognizable. For a lovely stroll just off the sand, Palisades Park runs the full length of downtown Santa Monica and features sculptures, a rose garden and views of the beach from a clifftop overlook.

Retail therapy is abundant in Santa Monica’s neighborhoods, especially at Third Street Promenade, a three-block area that’s free from cars. In between stops at retailers, you’ll have the chance to catch some amazing street performers. At its heart is Santa Monica Place, an upscale shopping destination with more than 80 stores from designer boutiques to world-famous brands. For a local shopping experience, Montana Avenue is home to luxurious and unique stores, while Main Street offers chic clothing shops, design stores and art galleries. When you’re ready for a break, grab a bite at one of many buzzworthy restaurants. Tar & Roses serves up trendy New American fare; Lunetta boasts quintessential Californian cuisine; and Birdie G’s melds American and Eastern European flavors. For a nightcap, grab a drink at Canary, where you can take in the hip California vibes, or The Penthouse, where you can enjoy cocktails and ocean views from the top of the Huntley Hotel.

A Route 66 sign can be found on the Santa Monica Pier – a reminder that the city is the endpoint to the USA’s fabled highway that connected its heartland to the vast Pacific Ocean.

Santa Monica is for (art) lovers. It claims the second largest collection of galleries per square foot in the USA (after New York City). It’s also home to more than 130 public murals.

The city’s connections to film and TV lore are many. The Annenberg Community Beach House was built for actress Marion Davies by William Randolph Hearst. Shirley Temple, Jack Black, Anjelica Huston, Tobey Maguire and Jamie Lee Curtis were all born in Santa Monica.

Dine with a View in California

What to Do and See in West Hollywood, California

California Stars: A Road Trip From Hollywood to Palm Springs

Good Vibrations: A Guide to the Beach Boys’ Southern California

Plan the Perfect Universal Studios Hollywood Getaway for You

An Insider’s Guide to Hollywood

Jazz Museums: Celebrate the Genre at These Musical Attractions

20 Outdoor Activities in Los Angeles for Under $20

5 Outdoor Escapes You Can Easily Drive to From Los Angeles

Your Guide to 8 Great Beaches In Los Angeles 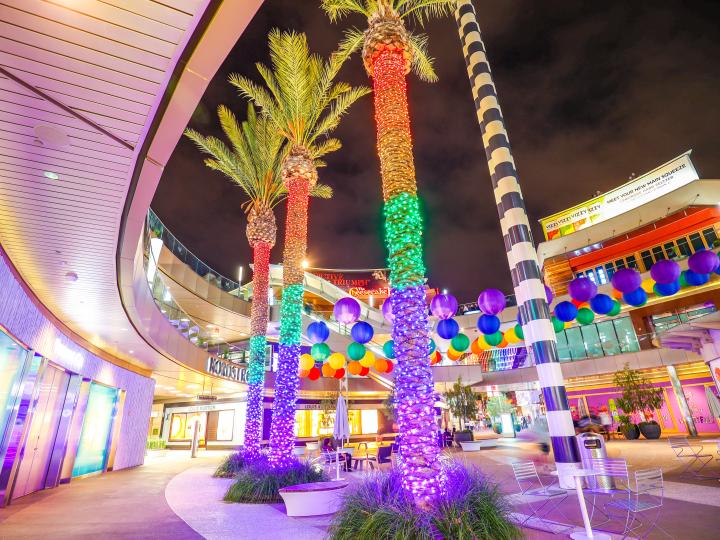 7 Great Beach Towns To Visit In The USA

7 Spots for Family Fun Around the USA

9 Family-Friendly Spots to Take Your Children in the USA