The BeltLine, a walking and biking thoroughfare dotted with public art and connecting the city’s neighborhoods

Illuminated fountains in Centennial Olympic Park, the heart of downtown

An array of marine life at Georgia Aquarium

The Midtown neighborhood, the city’s arts hub, at sunset

Outside the World of Coca-Cola, a must-see downtown attraction

View of Midtown from Lake Clara Meer in Piedmont Park

Strolling the colorful pathways of the Atlanta Botanical Garden

Views of downtown and cherry blossoms at Piedmont Park

Welcome to Atlanta – vibrant, cultural hub of the Southeastern USA

While Atlanta is a popular, bustling city with glittering skylines, it is also a city in the forest, dotted with expansive green spaces and charming neighborhoods. Discover hidden gems around every corner, including diverse dining, top attractions, incredible arts and entertainment. This urban oasis is a multi-cultural haven that exudes Southern hospitality in its own style. Ever-expanding and always reinventing itself, Atlanta is among the most influential and most welcoming cities in the USA.

The heart of the city is downtown, the perfect starting point for first-time visitors. Centennial Olympic Park is surrounded by Georgia Aquarium, World of Coca-Cola, CNN’s global headquarters, Children’s Museum of Atlanta, Center for Civil and Human Rights and the Chick-fil-A College Football Hall of Fame, all within walking distance of each other. Beyond Centennial Olympic Park, discover other top attractions including the High Museum of Art, Zoo Atlanta and Atlanta Botanical Garden.

Get the inside scoop on the Atlanta film scene with Atlanta Movie Tours including Atlanta film sites featured in The Walking Dead, The Hunger Games and the Marvel Cinematic Universe. There are 10 unique movie experiences offered on nearly 80 guided tours a month. Swan House Capitol Tours at Atlanta History Center includes a guided tour through the Swan House showcasing rooms used during filming of The Hunger Games: Catching Fire.

For the music fans, Atlanta hosts more than 30 festivals annually, including AC3 Festival, Atlanta Jazz Festival, Imagine Music Festival, Music Midtown, Shaky Knees and SweetWater 420 Fest. The musical heritage of Atlanta includes many legends who made their careers in Georgia’s capital, including Otis Redding and Gladys Knight, along with more recent artists like Indigo Girls, CeeLo Green, OutKast and many popular hip-hop artists.

Cultural Capital of the Southeast

The site of historic events including Civil War battles, the birth of the civil rights movement and the Centennial Olympic Games, Atlanta is rich with historical stories and figures. Martin Luther King, Jr. National Historical Park gives insight into the first steps toward civil equality and includes King’s birth home. The city is also home to Jimmy Carter Presidential Museum and Library.

Atlanta isn’t just another big city; it’s an urban landscape made up of nearly 45 in-town neighborhoods. Midtown is known as Atlanta’s “heart of the arts” and sits along the famed Peachtree Street, just a few miles north of downtown. It boasts the largest concentration of arts facilities and organizations in the Southeast.

You can also visit the “Beverly Hills of the East.” Buckhead is a shopping haven for fashionistas across the Southern USA. Find the latest styles from high-end designers at The Shops Buckhead Atlanta, Lenox Square and Phipps Plaza. Neighborhoods on Atlanta’s Eastside are connected by the Atlanta BeltLine Eastside Trail, a multi-use trail and greenspace that runs nearly five kilometers from Piedmont Park to Reynoldstown.

The Varsity in downtown Atlanta is the largest drive-in fast food restaurant in the world.

There are more than 50 streets in the greater Atlanta area with “Peachtree” in the name.

Where to Hear the Blues: Juke Joints, Dive Bars and Historic Venues

Taste and Explore World of Coca-Cola in Atlanta, Georgia

Classic Southeast: A Road Trip From Atlanta to Charleston

Macon, Georgia: A Holiday Full of Culture and History

4 Souvenirs To Remind You of the U.S. National Parks 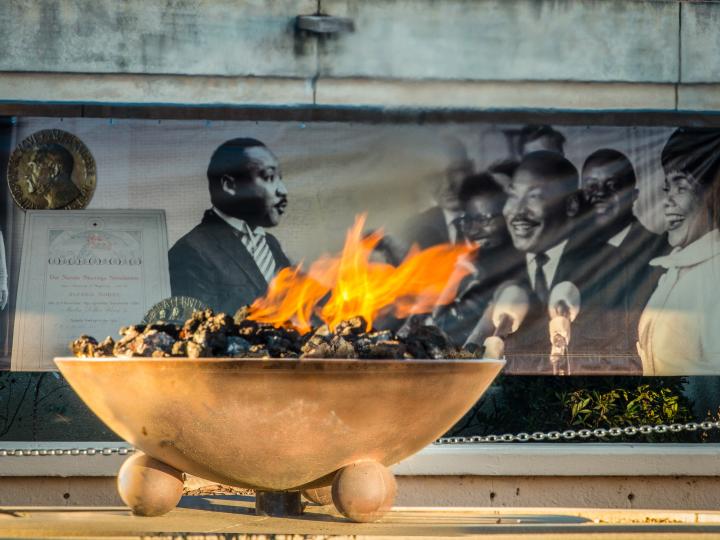 Find Things to Do

Kings of the South

Hip Hop in Pop Culture: How the Music Changed the World

Coast to Coast by Rail